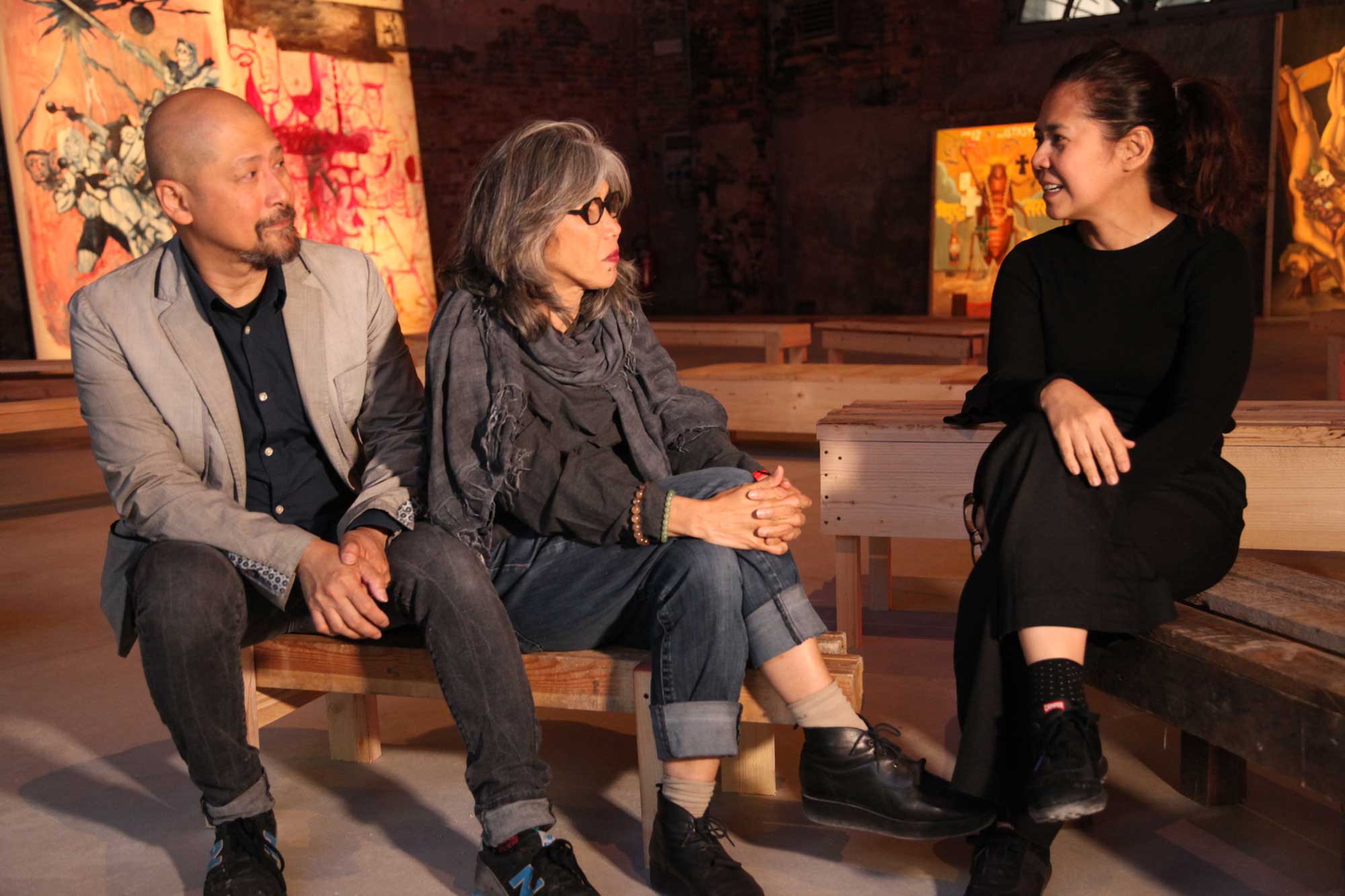 Joselina Cruz is currently Director and Curator at the Museum of Contemporary Art and Design (MCAD), De La Salle-College of Saint Benilde, Manila. Cruz has worked as a curator for the Lopez Memorial Museum in Manila (2001-2004) and the Singapore Art Museum (2005–2007). She was a curator for the 2nd Singapore Biennale, 2008, and a networking curator for the 13th Jakarta Biennale, 2009. She worked on the Tàpies retrospective and the The Deutsche Bank Collection and Zaha Hadid while at the Singapore Art Museum, amongst others, and Creative Index, for the 10th Regional Anniversary of the Nippon Foundation’s Asian Public Intellectuals Fellowship program in Manila, in 2010. From 2012 she has produced exhibitions with artists such as Michael Lin, Paul Pfeiffer, Tiffany Chung, Michael Lee and Maria Taniguchi at MCAD in Manila (Philippines). She has curated for the Jewish Museum (2016), Sørlandets Kunstmuseum, Norway (2011) and Next Wave in Melbourne, Australia (2010). She has been invited for visitorships and residencies by Asialink, the Mondriaan Foundation, Office for Contemporary Art (OCA) and the Center for Contemporary Art (CCA) in Singapore, and is a Fellow of the Nippon Foundation’s Asian Public Intellectuals Grant. She finished art history at the University of the Philippines and Curating Contemporary Art (MA, RCA) at the Royal College of Art, London. She continues to write essays, reviews, criticism and commentary on art.

Lani Maestro has exhibited extensively throughout her career including solo shows at Centre A, Vancouver, Canada (2010), Campo Santa Margerita, Venice, Italy (2007), Eglise Saint Nicolas, Caen, Normandy (2006) and the Dalhouise Art Gallery, Halifax, Nova Scotia (2006). She has also featured in numerous group exhibitions including the Beppu International Art Festival in Japan (2009), the Sharjah Biennal (2009), Museoi de Arte Contemporaneo (MARCO) Vigo, Spain (2007), the Metropolitan Museum of Art, Busan, Korea (2004), Casa de las Americas, Madrid, Spain (2000), the Asia-Pacific Triennial of Contemporary Art, Brisbane, Australia (1999) and the Istanbul International Biennial (1997). Maestro’s work has received critical acclaim and the respect of an international art community.  She has exhibited widely including the Biennials of Sharjah, Busan, Shanghai, Istanbul and Sydney. In 1986, she was an unofficial Philippine representative to the Segunda Biennal de la Habana in Cuba surprising the local art community when she was awarded the Biennial prize.  She was recently awarded the prestigious Hnatyshn Prize in Canada 2013. Co-founder, publisher and designer for Harbour magazine (1990-94), she was co-director of Gallery Burning and artist book publisher of Burning Editions.  For many years she taught at Concordia University in Montreal and at the Nova Scotia College of Art and Design in Halifax.

Lani Maestro received a BFA from the University of the Philippines in 1977 and an MFA from Nova Scotia College of Art and Design, Canada in 1988.  She was born in the Philippines in 1957 and currently divides her time between Canada and France.  She now mostly lives in Normandy.

Manuel Ocampo (b. 1965) has exhibited extensively throughout the 1990s, with solo exhibitions at galleries and institutions through Europe, Asia, and the Americas.  In 2005, his work was the subject of a large-scale survey at Casa Asia in Barcelona, and Lieu d’Art Contemporain, Sigean, France.

Ocampo’s work has been included in a number of international surveys, including the 2004 Seville Biennale, 2001 Venice Biennale, the 2001 Berlin Biennale, the 2000 Biennale d’Art Contemporain de Lyon, the 1997 Gwangju Biennale, the 1993 Corcoran Biennial and 1992’s controversial Documenta IX.  His work was featured in many group shows in the 1990s, at Museum of Contemporary Art, Los Angeles in 1992; Asia/America:  Identities in Contemporary Asian American Art at the Asia Society, New York in 1994;  American stories: Amidst Displacement and Transformation at Setagaya Art Museum, Tokyo in 1997;  Pop Surrealism at the Aldrich Museum of Artin 1998; and Made in California:  Art, Image, Identity, 1990-2000 at the Los Angeles County Museum of Art in 2000.  He has received a number of prestigious grant and awards, including the Giverny Residency (1998), the Rome Prize at the American Academy (1995-96), National Endowment for the Arts (1996), Pollock-Krasner Foundation (1995) and Art Matters In. (1991).

Manuel Ocampo studied Fine Arts at the University of the Philippines, then moved to Los Angeles, California in the 1980s where he studied at the California State University. Ocampo moved to Seville, Spain but has recently settled back in Manila, Philippines.